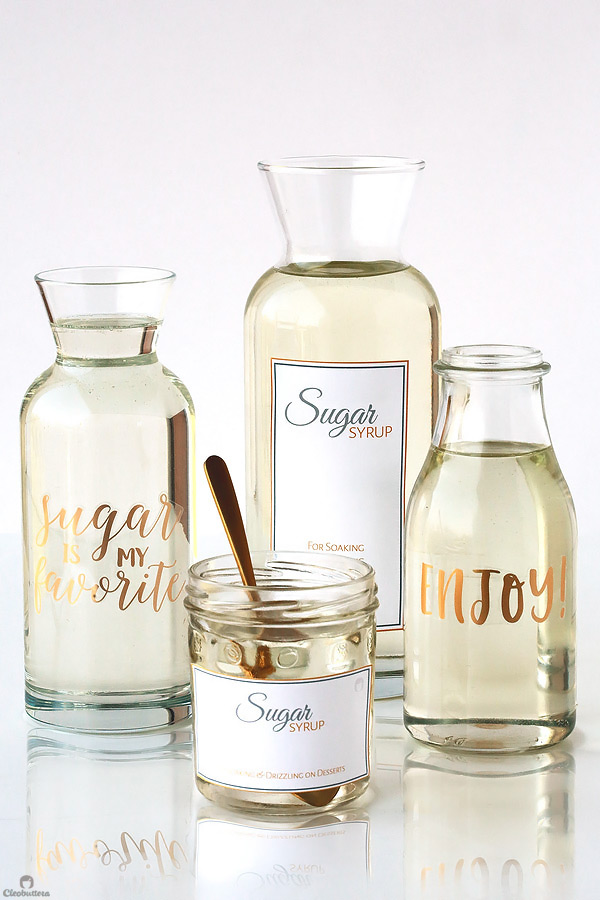 If there’s one thing Middle Eastern desserts is famous for, is that it LOVES sugar syrup.  Its the mother sauce of the sweet Arabic cuisine, an indispensable addition and the main contributor to its delightfully sticky identity.

On their own, iconic Middle Eastern desserts are barely sweet, making their dependance on a generous drench of syrup to both sweeten and flavor them, a necessity.

From Kunafa, Baklava and Qatayef to Balah El Sham, Zalabya and Halawet El Jibn, they all call for a heavy helping of sugar syrup to transform them from savory to pastry. 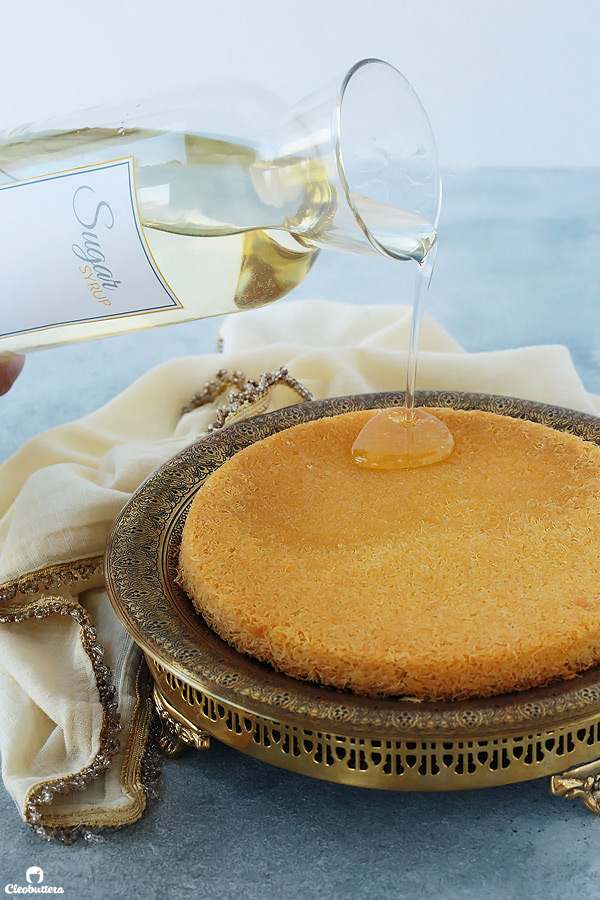 This type of syrup is sweeter and thicker than simple syrup, so it enrobes the food rather than wets it, preserving the pastry’s unique texture.  It’s also a great carrier of flavor, which perfumes the dessert with whatever flavor its infused with.

Making this kind of syrup is pretty simple, and typically uses only 3 everyday ingredients: sugar, water and lemon juice.  As great as it is to use right away, the problem with this formula is that it doesn’t have the best shelf life.  Due to its large ratio of sugar to water, it has the tendency to crystallize and become gritty if stored for longer than a few of days; basically ruined syrup!  This means that a new batch needs to be freshly prepared with each and every time a dessert that requires some is made. 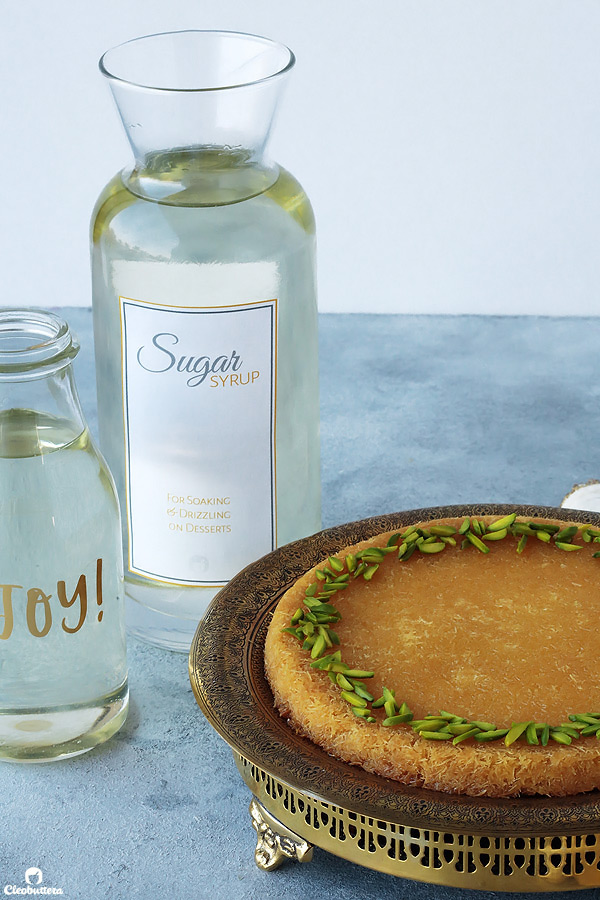 I have recipes that need as little as 3 tablespoons syrup & so many that require a scant 1/2 cup. Who would want to dirty a pot for that!  Not to mention those impromptu desserts that come together so much faster than it takes for the syrup to cool. Wouldn’t it be a shame to get held down just because you’re waiting for the syrup to cool down?!

So if you’re like me and regularly make Middle Eastern desserts year round, you’ll find this mundane step a very annoying one, especially that sufficient time is usually needed to allow the syrup to cool completely before using.

This is particularly inconvenient during the month of Ramadan, when Middle Eastern desserts are an everyday event in most Arab homes.

This is where the great Big Batch Sugar Syrup recipe comes to the rescue! 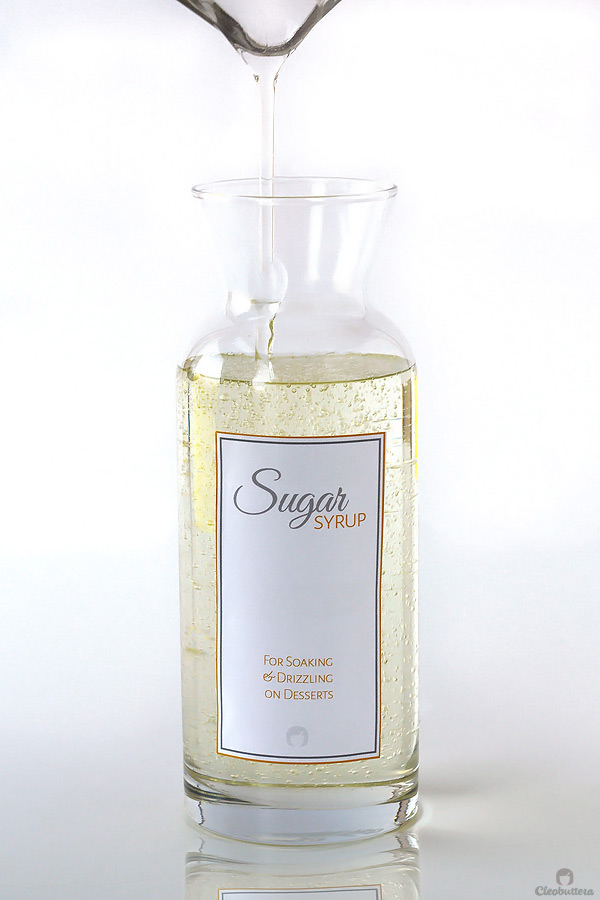 Not only does it make a very large amount to use over several desserts, but the real beauty of this recipe lies in the fact that it keeps well forever without ever developing a single crystal.  Forever, as in months and months and months at room temperature.

Simply put…if you make Middle Eastern desserts, even if as little as once a month, you need a trusty bottle of syrup hanging around to use by the drop or pour by the pint. In Ramadan on the other hand, it will be your life saver.

Unlike common recipes for syrup where you need to be extra careful not to over stir while cooking, or you’ll risk developing crystals, this recipe is practically foolproof.  So stir all you need, because nothing’s gonna happen to this one.

A little over a kilo of sugar gets dumped in a pot, and covered with a 1 liter bottle of water.  Previously, I used to make this recipe with exactly a 1 kilo bag of sugar and 1 liter of water, which was very convenient, but felt like it could get a bit thicker.  So adding an extra 2 1/2 cups (500 grams) of sugar to the existing kilo, proved to produce the perfect consistency. 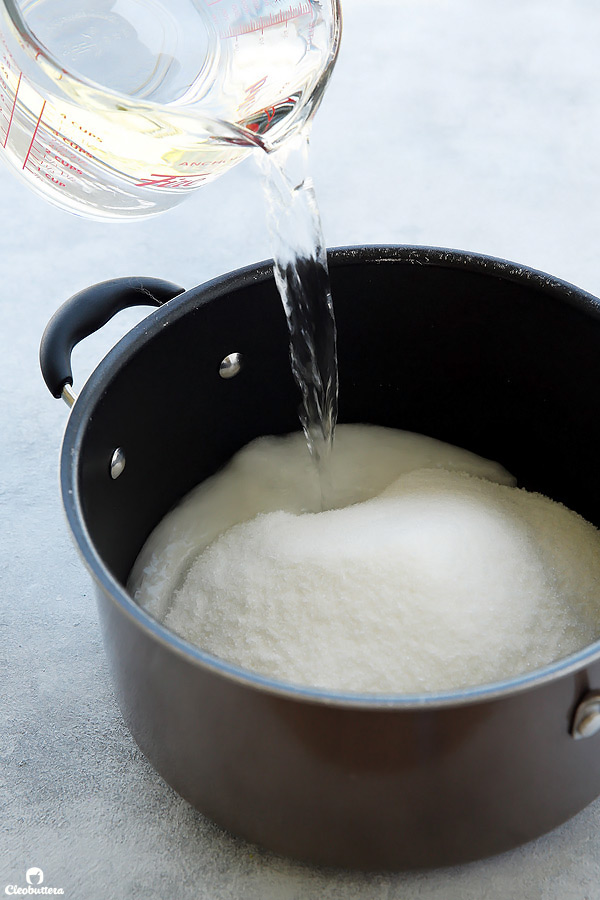 You’re gonna want to stir everything over high heat to dissolve the sugar, then leave to boil for 5 minutes. 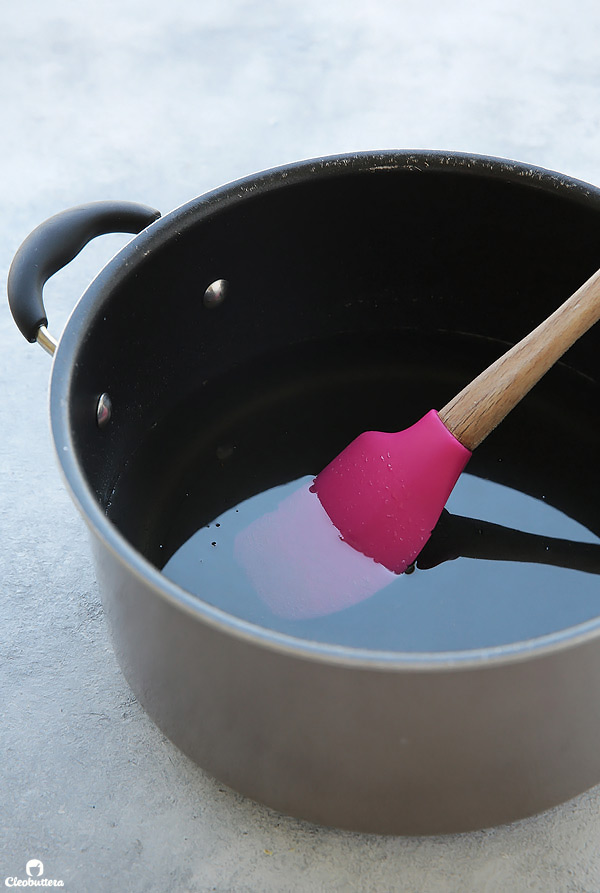 After that, 2 special ingredient get added in, which are the secret for that magical preservation of the syrup.

The first one is: Glucose Syrup. 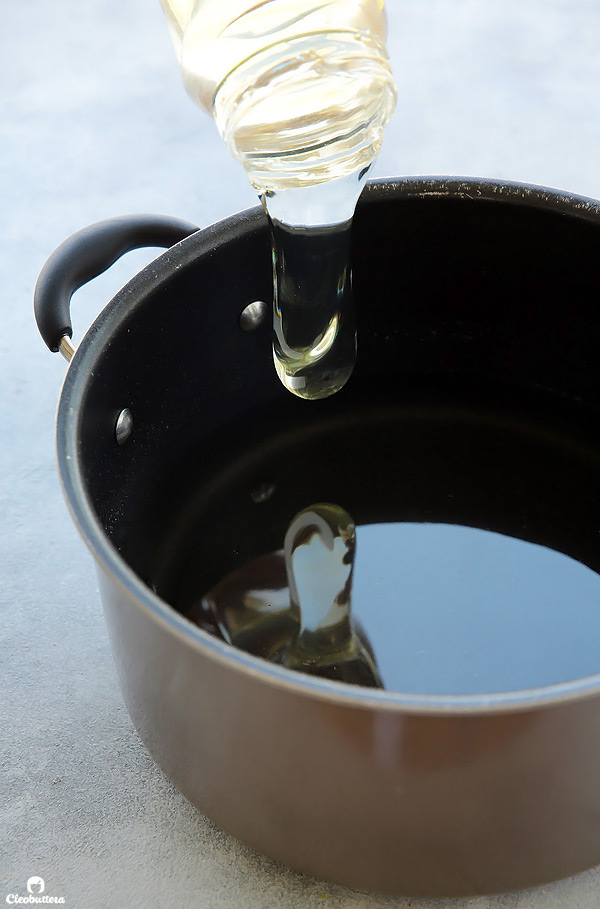 Glucose is basically an invert sugar that looks like corn syrup, but much thicker and a lot less sweeter.  Think of it as sugar in liquid form.  Its purpose here is to prevent the chance of crystallization and increase the syrup’s shelf life.  It is this backbone of this particular recipe and the star of its success, so don’t skip it.  It can be easily found on Amazon, but I get it from a popular confectioners’ specialty store here in Cairo called Darb El Barabra. 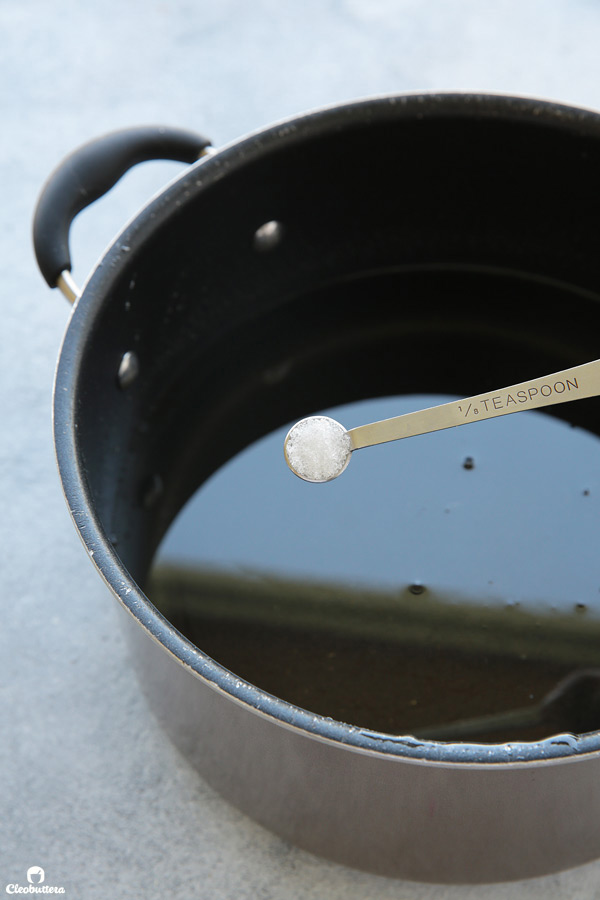 Lemon Salt is a natural preservative and a flavor contributor.  Its tart taste cuts through the sweetness of all the added sugar, without imparting lemon flavor, making it the perfect blank canvas for any flavorings of your choice.  It also doesn’t add unwanted liquid to the syrup, which may thin it down, the way lemon juice does.  It can be easily found along with the spices in most supermarkets.

Speaking of blank canvas…this syrup is all yours to customize.  So go crazy with the flavors you love the most! 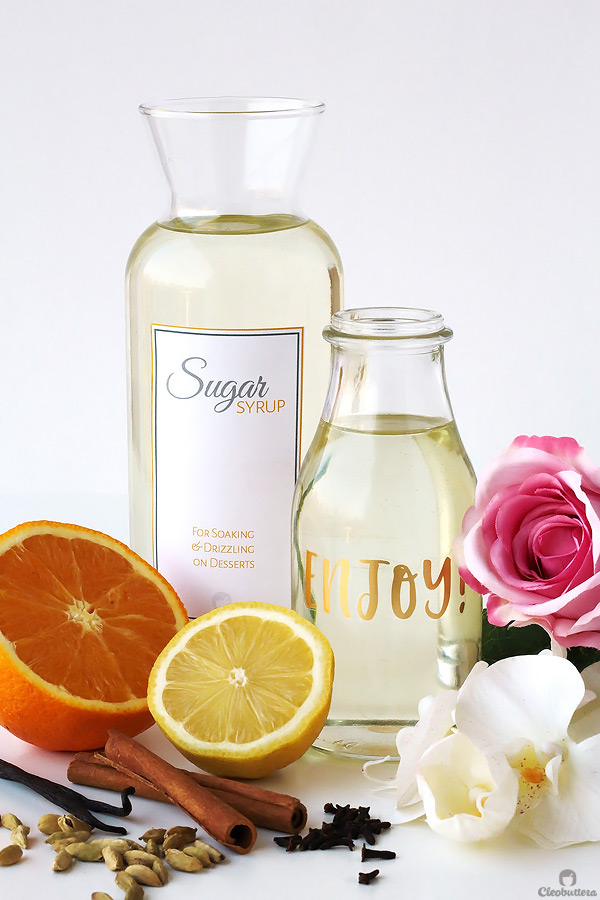 Popular flavor infusers include, rose and orange blossom water, which can be used separately or together.  Spices like cinnamon, cardamom, cloves and peppercorns are also amazing here, and go swimming well with baklava!  And who doesn’t love vanilla?  It’s probably the most agreed on flavor in the world.  Use it in the form of beans, if you’re up for the splurge, or cut back on the expenses and add vanilla extract or powder instead.  If you love citrus, throw in an orange or lemon peel while the syrup is cooking.  Another common yet pricey flavoring is saffron!  This thing gives the syrup the most gorgeous yellow tinge while hitting it with the exotic taste its known for.

And then you’re all ready to use it for any recipe that calls for sugar syrup…which the exception of basbousa, but we’ll get to that later.

Bottled up and labeled like I did here, would turn it into the nicest gift. 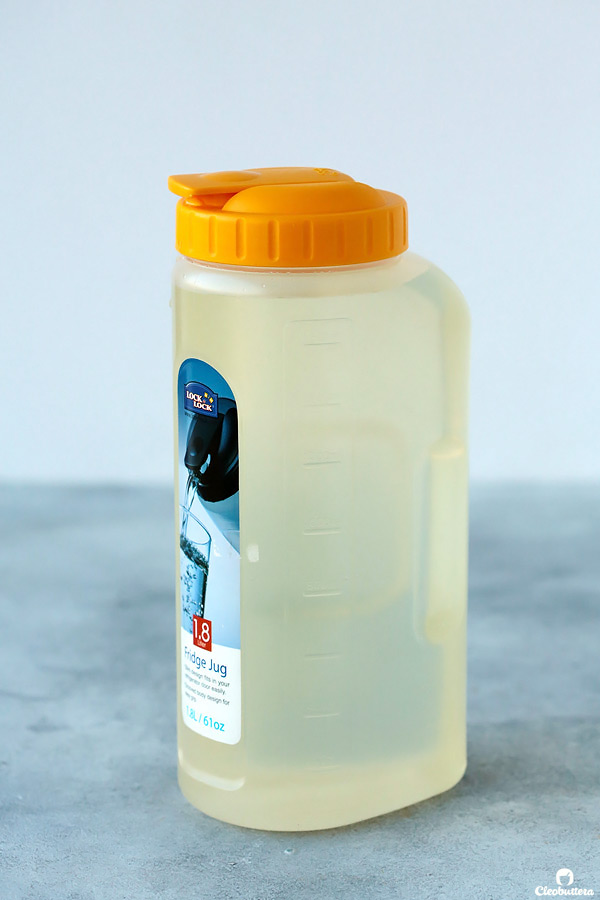 Ramadan is in a couple of days…so hurry!  Make a batch of this today!  And stay tuned for 13 Middle Eastern dessert recipes coming your way within the next month.  More than half of which calls for syrup ?

Options for flavoring the syrup: (use 1, a combination of few or nothing at all. Adjust amount according to taste) 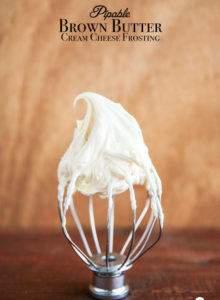 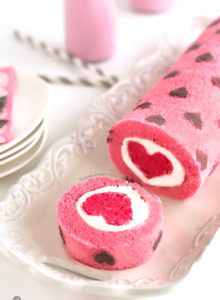 “Love is All Around” Cake Roll 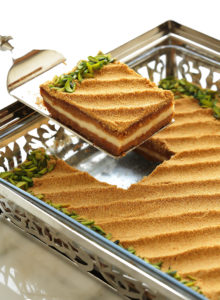 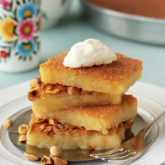 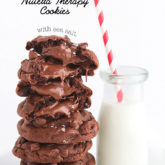